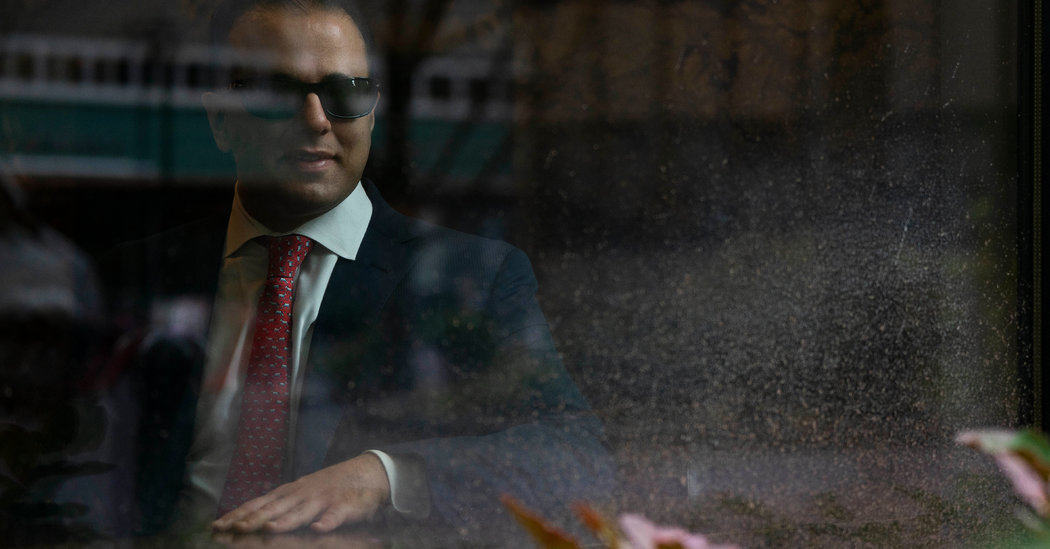 In the market for Easter Sunday inspiration? Try the parable of the blind man who gave up political glory for Jesus Christ.

He quickly climbed the rungs of power, became the lieutenant governor of the state of Washington at 35 and had reason to believe that he’d be governor someday, maybe even before he turned 40.

His ascent impressed people all the more because of his disability. At the age of 8, he lost his sight: A rare cancer forced the removal of both of his retinas. He spent the next decades proving to the world — and to himself — that he could nonetheless accomplish just about anything that he set his mind to.

He attended Columbia University. He won a Rhodes scholarship. He graduated from Yale Law. “From Braille to Yale” was how he often described his journey. It made for a great political speech.

Then the man, Cyrus Habib, had an awakening.

“How many ways,” he said “can you be called a rising star?”

He decided not to find out. Last month Habib, now 38, announced that instead of being on the ballot in November for a second term as lieutenant governor, he would soon leave office to become a Roman Catholic priest.

Frank Bruni’s Newsletter: Get a more personal take on politics, newsmakers and more with Frank’s exclusive commentary every week.

A few additional details amplify the surprise of that swerve. He is entering the Jesuit religious order, whose intensive, extensive ordination process typically takes about 10 years and involves vows of poverty and obedience as well as chastity.

And he committed to this course just as political gossips speculated about a heady promotion for him. He was a lock for re-election, as is the state’s governor, Jay Inslee. But in one scenario, a Joe Biden presidency could lead to a high-level administration position for Inslee, who would then have to step down. His lieutenant governor would immediately take his place.

Habib worried that if he moved into the governor’s office, he might be too intoxicated by power to let it go. Stepping down now, he told me, is like “giving your car keys to someone before you start drinking.”

His redirection has nothing to do with the coronavirus pandemic, he said. But it does reflect the sort of moral inventory that many people conduct at a time of great suffering, the type of spiritual epiphany they experience in the face of terrifying uncertainty.

“We’re not completely in control,” he told me during a series of long telephone conversations over the past two weeks. “Look at what we’re going through now. Something that you can’t even see with the naked eye is ravaging us.”

If anything, that bolsters his resolve to take a sledgehammer to the old fortifications of his ego. “That can-do, can-overcome mentality is fantastic and can get you far,” he said. “But if hardened into an ideology of its own, it can crowd God out, because it makes you into a kind of god and says: ‘I’m not a contingent creature. I’m completely independent.’”

Are our most obvious achievements catalysts for contentment, or are they a prison? Can we tend to others if we’re constantly fussing over ourselves? I think many of us are afraid to ask those questions. The answers might upend our lives, just as Habib’s upended his.

“He has a tremendous degree of self-reflection,” said Ronan Farrow, his roommate at Yale Law. The two of them hung out there with their much older classmate Elizabeth Wurtzel, whose best-selling memoir, “Prozac Nation,” had been published a decade earlier.

“Maybe that goes hand in hand with his faith,” Farrow said. “He’s a person on a journey, and he has developed a stillness and a centered-ness that I wouldn’t have necessarily expected, because he was this bright, shining, super-ambitious leader. There’s an extraordinary arc to Cyrus.”

Habib’s parents immigrated to America from Iran. He was born here, their only child, and was still an infant when he received a diagnosis of retinoblastoma. His left retina was removed before his third birthday. In order to preserve the right one — and his vision — for as long as possible, he went through radiation and chemotherapy.

When he flashed back to that, he focused on his parents’ ordeal. “Hell is probably not dissimilar to walking into a pediatric cancer ward and seeing, as my parents had to, beds of kids lined up, each connected to an IV pump, and knowing your kid is going to be joining that.”

He also called himself lucky. Being able to see until he was 8, he said, let him amass a thick catalog of visual memories to rummage through later. But losing his sight in childhood rather than adulthood meant he was able to adapt while his brain was still plenty elastic.

“I learned Braille,” he said, “while other kids were learning cursive.”

He went to public schools in the Seattle suburbs, and his parents insisted that he not be treated differently than other children were. Habib has often told the story of how his mother, Susan Amini, responded when she learned that he was being kept on the sidelines of the school playground because he was blind and administrators worried that he’d hurt himself: She marched to the principal’s office, declared that she would teach him the layout of the playground and demanded that he be given full access to it from then on. A broken arm, she said, could be fixed more easily than a broken spirit.

Amini told me that she and her husband reasoned: “If you worry too much about a child, you become an obstacle. We decided not to make our fears his.”

Habib devoured popular fiction, serious literature and history, reading in Braille or listening to recordings. “Books allowed me to see — through the eyes of the author, the eyes of the narrator,” he said.

He excelled academically. He made sure to. Outperforming his peers was insurance against being belittled or marginalized.

He took up the piano, karate, downhill skiing. He strove for a debonair look, insisting that the sunglasses that he wore to keep dust out of his eyes were stylish.

But the more frequently that was mentioned, the more awkwardly it sat with him. His friend Lee Goldberg, who went to Columbia with him, told me that Habib watched other politicians race to the television cameras and meticulously plot their careers and was increasingly turned off.

“Every step that you’re taking, it seems like there’s another one you need to take,” Goldberg said. “You see it with Andrew Cuomo. He’s doing a fantastic job in New York and people can’t leave it alone there. The focus immediately shifts to whether he’s going to replace Joe Biden or is he going to run in 2024 or 2028.”

Habib said that federal lawmakers increasingly seemed to be interested in posturing, not problem-solving, which involves compromise. “You have to face the political reality you’re in and not just present a competing utopia,” he said.

But what challenged his thinking about his future perhaps more than anything else was his father’s death in late 2016 at 64. It was a lesson in nonnegotiable limits, and it broke his heart.

Although he hadn’t been particularly religious as a child or in college, he was subsequently drawn to Catholic teaching and faith, and one of his spiritual advisers in the church recommended that he read “The Jesuit Guide to (Almost) Everything” by the Rev. James Martin, a nationally renowned Jesuit priest and best-selling author. Habib did — and it pointed him toward what he thought might be a more satisfying, impactful way of helping people in need.

Sometime this fall he’ll report to a novitiate in Los Angeles, where he’ll live among other Jesuits. “He’ll have a dramatic change of life, from being lieutenant governor of Washington to being told he’s cleaning the bathroom the wrong way,” Martin told me.

Habib recalled that during a visit to the novitiate, he suggested that he donate a Roomba robot vacuum “so we can use that vacuuming time to do other things. The other novices said: ‘Dude, it’s not about that. This is going to be an interesting transition for you.’”

His mother agreed: “I actually joked with him that I wanted to see how that vow of obedience was going to work for him. More power to the Jesuits, I have to say.”

I asked Habib about chastity. He said that while he’d had romances, he’d never had an urge to be married with kids, so that part of the priesthood isn’t so daunting.

What about the surrender of his autonomy to the order’s directives? Wouldn’t his world become smaller?

Late last summer he trekked to the top of Mount Kilimanjaro, another of those accomplishments he loved to rack up. On the final stretch, he became ill and had to pause every 10 steps.

“I was thinking to myself, ‘If I don’t summit, people will never believe that it was because of the bronchitis or altitude sickness — they’ll think it’s because I’m blind’,” he said. “I never told that story publicly, because it shows my vanity — that the only thing I feared more than death was public humiliation.”

He’s ashamed of that. But he’s also doing something remarkable about it.