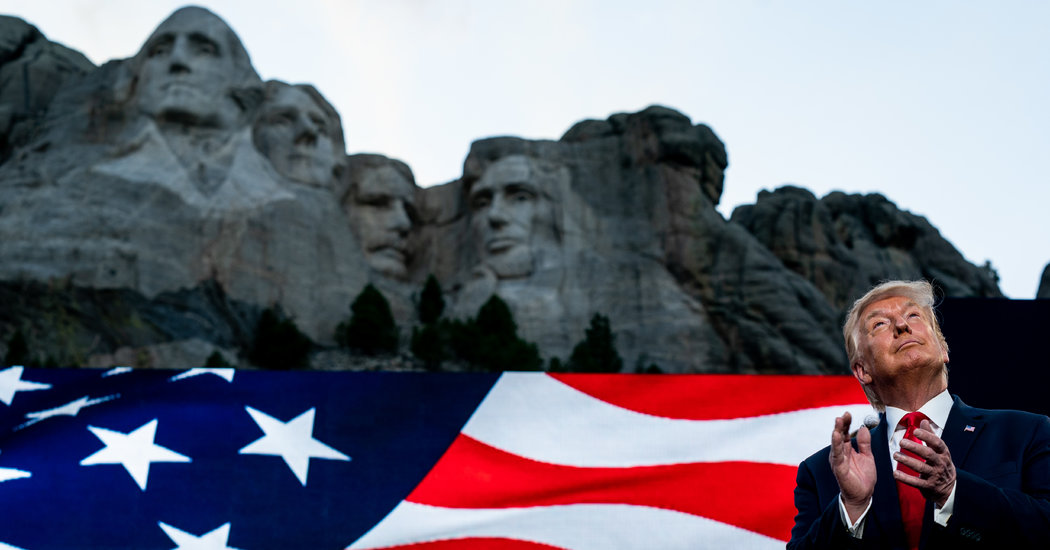 Bret Stephens: Gail, I hope you had a fun and happy Fourth of July weekend. Did you spend any of it watching reruns of Donald Trump’s Mount Rushmore speech?

Gail Collins: Well, Bret, I know you have a higher opinion of Thomas Jefferson than I do. But I believe we can agree that Trump’s speech would have caused Jefferson to put his great stone head under a blanket and cry.

Bret: Actually, I thought it was a speech very much in the Jeffersonian tradition, in terms of the distance between the political ideals it expressed and the personal behavior of the man expressing them. It’s almost hilarious to hear the guy who belittles and demeans anyone who disagrees with him object to leftists “demanding total submission from anyone who disagrees.”

Bret: That said, I thought it was a canny political speech that Democrats dismiss at their peril; it reminded me of the way Ronald Reagan’s 1984 campaign pegged Walter Mondale’s followers as the “blame America first” crowd. The Democrats’ Achilles heel in this election is a far-left fringe that may be relatively small but is highly visible. And Americans aren’t going to get behind anyone who wants to remove George Washington’s statues along with Jefferson Davis’s; or to rewrite U.S. history as a story of unbending oppression as opposed to gradually and imperfectly unfolding liberty; or to defund, rather than to reform, the police.

My sense is that Joe Biden will need to put some more visible daylight between his campaign and that side of the left, even if it risks alienating a part of his base.

Gail: Biden’s made it very clear he’s opposed to improvisational statue toppling — what he refers to as “grabbing Jefferson off his chair.”

Bret: I can happily live with four years of bad diction and fumbled phrases. In the great contest between the evil buffoonery and the dottering mediocrity, the choice for me is easy.

Gail: The event that I think will have huge reverberations in November is Trump’s decision to push his court case against Obamacare. The country is obsessed with coronavirus, and the White House is fighting to get rid of health insurance protections for people with pre-existing conditions.

Bret: It’s political malpractice. I was opposed to Obamacare in 2009 and wanted the Supreme Court to repeal it in 2012. But health care systems, however imperfect, take on a life of their own. Change should always be incremental, and it should never harm people who are directly in harm’s way. Which, of course, is where so many people are today.

Gail: Wow, Trump continues to bring us together. He might be dividing the country but he’s uniting the columnists.

Regarding the Obamacare suit: I don’t see the Supremes deciding to dismantle it. Chief Justice Roberts is settling nicely into the Anthony Kennedy role as the Court’s swing vote. And he seems especially reluctant to turn the Court into an agent of sweeping social change, which explains his vote in the Louisiana abortion case. I think that’s the essence of thoughtful conservative jurisprudence, centered around respect for precedent and incrementalism.

The other big question hanging over us is about the continued spread, especially in the South and West, of coronavirus cases. Can the country afford to shut down again? Or is the right question whether it can afford not to shut down?

Gail: Can you imagine running a restaurant in New York or New Jersey, waiting out the shutdown, and then discovering that you’re not going to be able to reopen because places like Arizona and Texas tried to avoid suffering, and then hosted a coronavirus comeback?

Bret: I wonder about that. Coronavirus rates are also rising steeply in California, which had a lockdown about as severe as New York’s. And fatality rates are so far holding steady or rising only slightly even in states like Texas and Florida that have seen infection rates soar over the last month.

Gail: Gov. Andrew Cuomo and Mayor Bill de Blasio have been hearing the restaurants’ howls of pain for months now, and the last thing they wanted to do was postpone the next stage of reopenings. I give them a lot of credit for making the hard choice.

Of course once again, the problem is at the top, where the president is claiming that 99 percent of coronavirus cases are “totally harmless.” Life with Trump keeps reminding me of that scene in “Peter Pan” where Tinker Bell is dying and the audience revives her by clapping to prove they all believe in fairies. Worried about a pandemic? Just keep saying everything’s fine and magic will happen.

About the restaurants: What’s your feeling about reopenings?

Bret: I’m all for doing everything possible to facilitate outdoor dining, at least while it’s warm and sunny. If it means shutting off most of Greenwich Village to traffic, I’m for it.

My main belief is that we shouldn’t simply impose one-size-fits-all solutions. Instead of working toward this or that date when all restaurants can reopen at the same time, why can’t restaurants be asked to meet certain safety criteria for indoor or outdoor dining?

Gail: That’s sort of what’s happening. The indoor restaurants have to meet certain spacing requirements between tables, and of course the staff wear masks. But I know you think people like Cuomo are overdoing it.

Bret: Cuomo’s made bigger mistakes than that, though it’s too easy to fault someone, in hindsight, for exercising an abundance of caution.

Still, until there’s an effective vaccine, we’re not going to have a perfect solution. But we can have 100,000 partial solutions, each involving some sensible, localized accommodation between need and risk. Colleges can adopt hybrid solutions for classroom instruction, mixing in-class and virtual learning. Cities can broker accommodations to lower rents for small businesses while they limit the number of customers. Airlines can conduct 15-minute Covid spit-tests, helping to ease travelers’ minds. And all these arrangements can be subject to common-sense changes as conditions improve or deteriorate.

Tangentially related: Do you miss going into the office?

Gail: Wow, I really do. Columnists have always been able to work anywhere, but I really treasured my days in the office. Just doesn’t feel as much like writing for a newspaper when the only other inhabitant of my work space is a dog.

Bret: You’ll be happy to know that I’m getting a dog. He’ll be a useful sounding board for my more rabidly conservative columns.

Gail: Just don’t let him sit on your laptop. I speak from experience.

I miss everything the office was, and what it represented. The enclosed garden in the lobby. The great characters at the security desk. The gorgeous city view from the cafeteria. The nervous energy as deadlines approach. Watching Nick Kristof at work across the desk from me and Frank Bruni behind him and you behind Frank. The office gossip. The patatas bravas at that Spanish place across the street. The sense of belonging to a great institution of so many brilliant parts on which so much that matters depends. The feeling of being at the precise center of a city that embodies so much of what I love the most about the country — the striving and variety and excellence and crowding and everyone-trying-to-get-along-in-spite-of-it-all.

Yeah, I miss it. When does regular programming return again?